Conflict of interest: None

Aim: To present a novel technique developed in our institution to remove incarcerated and broken intramedullary (IM) tibial and femoral nails.

Background: IM nails are commonly used to treat diaphyseal fractures in both the tibia and femur. These nails can become problematic for the orthopaedic surgeon when they need to be removed, especially in the rare event that the nail has failed and broken. This can leave part of the nail deep in the bone and incarcerated. Multiple techniques have been described to remove a broken nail but we present a novel technique developed based on our experience.

Technique: After all other methods to remove the broken nail have failed, a window technique can be employed. This requires a small window of bone to be removed from the cortex overlying the remaining IM nail. A carbide drill is then used to drill a hole into the nail to gain purchase. The edge of an osteotome is placed in the hole in the nail through the window and gently hammered upwards to push the nail towards the over-reamed nail entry point. The nail is repeatedly drilled and pushed until the nail can be removed. The bone window is then replaced.

Conclusion: This is a novel technique that works when all other options including hooks, wire stacks and specialist nail removal techniques have failed. It is simple, efficient and effective for both the tibial and femoral nails.

Intramedullary (IM) nails are used widely for the management of diaphyseal fractures of the tibia and femur.1 Whilst these can be retained indefinitely after successful fracture union, some may require removal in cases of non-union, infection, deformity, implant prominence causing soft tissue irritation and, occasionally, at a patient’s request. The majority are easy to remove but, at times, the surgeon is faced with a situation where the nail is firmly integrated. This situation is made more challenging if the nail is broken or breaks when an attempt is made to remove it. In these events, the nail tends to fail a few centimetres proximal or distal to the site of non-union. When the nail breaks distal to the non-union, it can be removed through the non-union. However, removal is more challenging when the nail breaks proximal to the non-union.

The process of fracture union and design of the nail both contribute to the potential failure of the metalwork.2 The breakage points can occur at non-union sites due to fatigue failure3 as well as other weak parts of the nail. The biomechanics, materials and engineering of tibial and femoral IM nails have been improved4 and newer types are designed to accommodate ease of insertion and restoration of normal anatomy. However, this may not stop breakage of the nail at specific points, such as the lag screw or blade—nail interface in the femoral nail where the diameter and angle of the nail changes.5

Further surgery, whether removal of the metalwork, an exchange of the nail or the use of other fixation methods in revision cases, will require extraction of the nail. This procedure can be technically challenging, with the potential of serious complications6 compounded by a broken IM nail.

The removal of the IM nail is a balance between causing minimal soft tissue dissection, with the least soft tissue being stripped from the bone as possible, minimal bone loss and the prevention of new stress-riser fractures. Nail-specific extraction instrumentation should be used whenever possible. Multiple generic extraction kits are available and several techniques have been described to remove broken nails including using custom-built long hooks,6,7 multiple guide wires8 and proximal stacked wires.9

We describe a technique of extracting an incarcerated nail by creating a strategic window in the bone to access it, creating a hole in the nail and punching it out carefully. Often, multiple holes are needed to remove strongly integrated nails but with this method only one window is used. The senior author has used this technique on five occasions, between 2003 and 2020, at our institute.

Using the standard approach and incision, the proximal part of the nail is exposed. Soft tissue and any extra bone should be removed using osteotomes and gouges. All proximal and distal locking bolts are then removed. The proximal broken part of the nail can usually be removed with relative ease using nail introducer from the manufacturer. This nail track is then widened by over-reaming 2 mm + diameter of the nail to create an obstruction-free channel for the distal part of the nail. Firstly, attempts should be made to use a bullet-tipped wire and smooth wire, corkscrew, fishhook or the Coremus Extractor System—Bolt to remove the remaining nail segment. If this fails, we recommend using the “window technique”.

The technique begins by using intraoperative imaging to locate the proximal part of the distal segment of the IM nail left in situ. This will allow for the correct siting of the bone window to access the nail (Fig. 1). A separate incision and approach might be needed depending on how far distal the nail is from the primary incision. 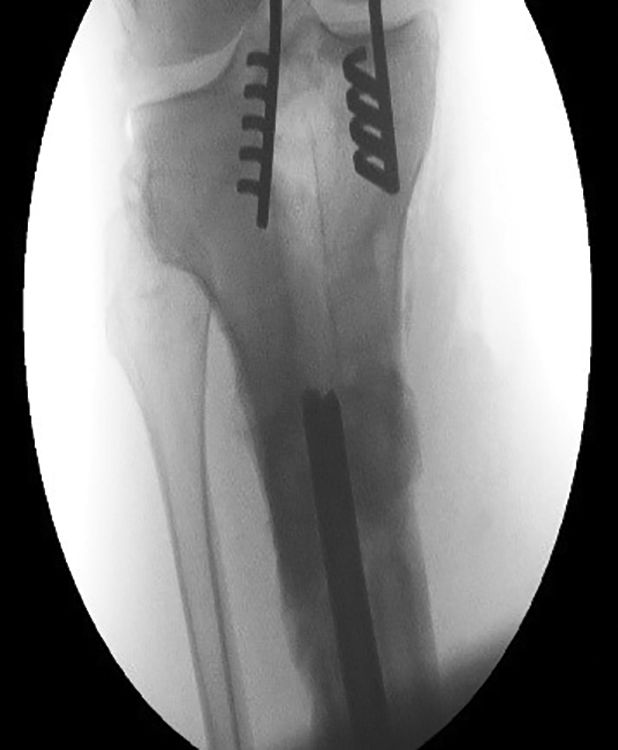 Fig. 1: Intraoperative imaging showing an incarcerated nail in the tibia. Utilize this to allow for correct positioning of the bone window

The next step is to create a bone window over the incarcerated nail. The window is always anterior in the tibia and lateral in the femur. The width of the window should be 1–2 mm wider than the nail, and the length is generally 2–3 cm. This window is located in such a way that an osteotome or punch or similar instrument can approach the nail at 30–45° (Fig. 2). The window is marked using multiple drill holes and completed with osteotomes. The corners of the window are rounded off with a small osteotome. This cortical window is preserved to be replaced at the end of the procedure. The overall dimensions of the window should be kept to less than 30–40% (Fig. 3) of the circumference of the bone to prevent the risk of a stress-riser fracture. By adhering to this rule, none of our patients have developed a stress fracture.

Fig. 2: Illustration of the tibia from the lateral aspect and incarcerated nail with drill hole in. The punch/osteotome is placed at a 30–45° angle and the position of the bone window must allow for that. The nail can then be hammered using the punch/osteotome pushing the nail towards the entry point 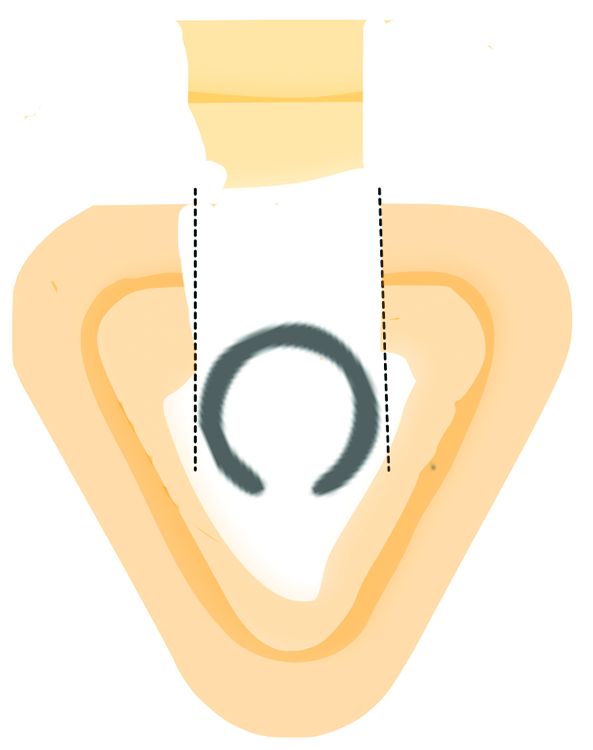 Fig. 3: Illustration through the tibia depicting the incarcerated nail and bone window no greater than 30–40% diameter of the bone

Once the window is opened, the fibrous tissue around the nail is cleared as much as possible with a fine curette. A carbide drill (MidasRex©) is used to make a hole in the anterior wall (if in the tibia) of the nail only. This generates fine metal debris so the surrounding area should be packed with a small swab to capture it. The drill should be kept cool by irrigation. Care is needed to avoid penetration of the opposite (posterior) wall of the nail. The initial direction of the drill is at right angles to the nail and then directed at a decreasing angle to shape an oblong hole (Figs 4 and 5). When completed, an appropriately sized ‘blunt’ osteotome or a punch is rested against the top edge of the oblong hole and hammered in at an angle to push the nail retrograde and not against the posterior cortex of the tibia or medial cortex of the femur (Fig. 2). A firm, repeated hammering action is essential. Care is needed not to incarcerate the punch in the hole or miss the hole and hit the bone. This process is continued until the oblong hole disappears under the proximal edge of the window (Figs 6 and 7). The process of drilling a new hole in the nail is then repeated and followed by the repeated tapping on the punch; this is done as many times as needed until a sufficient length of the nail is extruded out at the top and the entire can then be carefully extracted. The medullary canal is then cleaned of all the metal debris and the cortical window replaced. If the non-union is infected, we do not recommend the window is replaced. Internal fixation of the window is not needed unless it is part of another procedure to treat the non-union.

Fig. 4: Illustration of the tibia from the lateral aspect. The incarcerated nail being drilled through the bone window to make a uni-cortical hole in the nail

Fig. 5: Illustration of the tibia showing the bone window. Exposed incarcerated nail and several drill holes in the nail 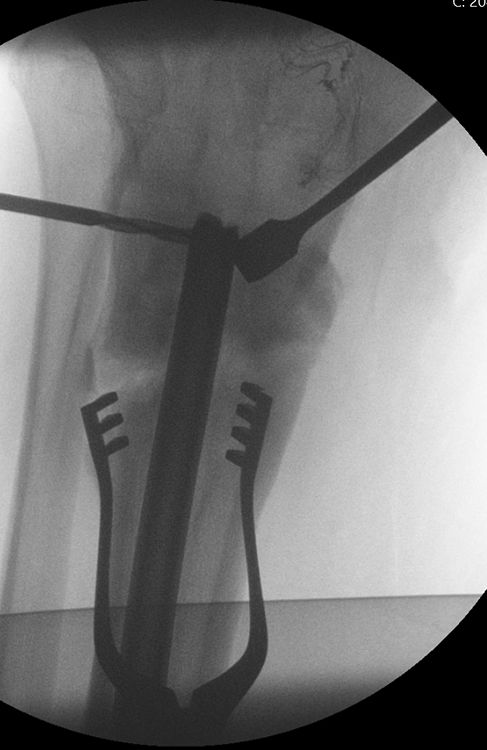 Fig. 6: Intraoperative imaging showing the technique being used and the drill holes being made into the nail through the window of bone 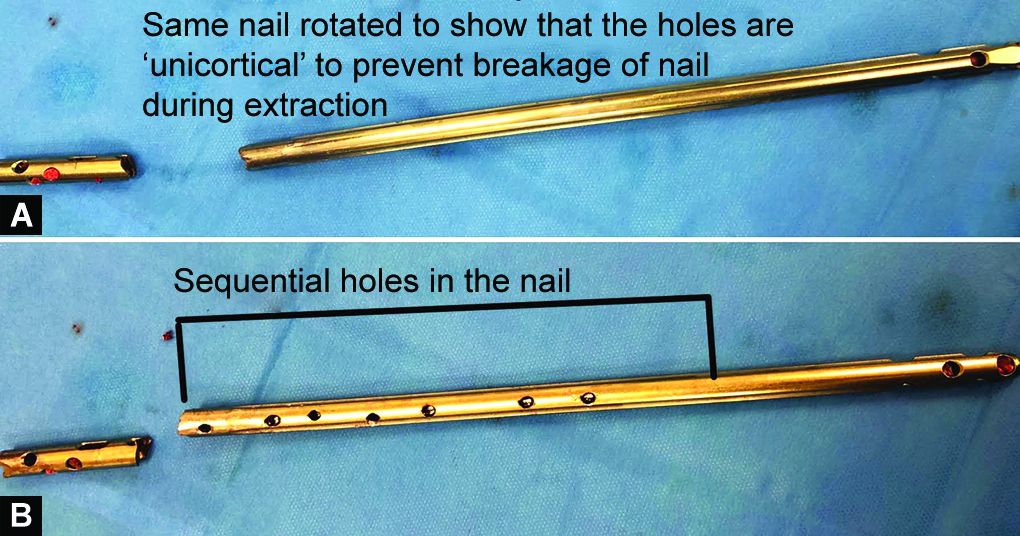 Figs 7A and B: Picture of a broken intramedullary nail removed using the described technique showing the sequential uni-cortical holes

This technique is cost-effective, simple, reproducible, reliable and has proven effective in cases where commonly used tools and techniques have otherwise failed. It has proved successful as it provides the ability to apply more force along the long axis of the nail to make the removal of the nail more feasible.

Creating the bone window to be less than one-third the circumference of the bone and its replacement should cause no issues with stress fractures. The replaced bone acts as an autologous bone graft and the cases have gone on to heal with no complications.

The technique utilizing a small window made in the cortex of the bone from which to access the nail, to drill a hole in it and then tap it back up and out of the canal has been used in our department successfully for both tibial and femoral IM nails which had broken and with incarcerated segments that needed extracting. After all other attempts and methods to remove the nail have failed, this is a safe and effective fall-back technique.

________________________
© Jaypee Brothers Medical Publishers. 2022 Open Access This article is distributed under the terms of the Creative Commons Attribution-Non Commercial-share alike license (https://creativecommons.org/licenses/by-nc-sa/4.0/) which permits unrestricted distribution, and non-commercial reproduction in any medium, provided you give appropriate credit to the original author(s) and the source, provide a link to the Creative Commons license, and indicate if changes were made. If you remix, transform, or build upon the material, you must distribute your contributions under the same license as original. The Creative Commons Public Domain Dedication waiver (http://creativecommons.org/publicdomain/zero/1.0/) applies to the data made available in this article, unless otherwise stated.